A copy of my blog from http://nzbookmonth.co.nz

On Friday night on Wellesley St here in Auckland there was nearly a riot.

It was outside the London Bar because there was a gig on that night that proved so popular the Bar was stuffed to capacity before the show started.

Tears were shed, tantrums flung and bribes offered as people were desperate to get inside BUT over 100 people ended up being turned away.

SO what was the gig do you think?

No in fact it was a Performance Poetry gig, namely Poetry Idol.

Usually the only riot poetry causes is when people stampede away from it. In fact people can be so scared of Poetry that they see psychiatrists for their condition, which is clinically known as Metrophobia.

I am not making this up. As if a limerick and a sonnet are going to be lurking behind a bush and jump out and molest you with their evil stanzas. “OOOh watch out the Haiku will get you!”

Yes well, the extreme reaction is rare but most people have probably had a nasty little outbreak of Metrophobia from time to time, mostly prompted by Crap English Teachers/Lecturers.

“Yes but what does it MEAN?” barked at you by pearls and a twinset does little to encourage an interest in words, and by the time I got to English 101 at Canterbury University I found poetry about as interesting as Bob Clarkson.

But then I discovered poetry as performance and it seems the Auckland Massive has as well.

Friday night, to be frank, went off like a bride’s nightie.

The queue to get into the bar extended down the street and when it became evident most would not get in, various poets launched into outdoor impromptu performances to entertain them. Awesome!

Inside every nook and cranny of the Bar was filled with hugely smiling faces as the ten contestants, who had been whittled down from thirty in auditions, took to the floor.

We had old, young, bald, hirsute, clean, filthy, gay, straight, newbies, old hands, crazy and sane, and the audience lapped it all up. One particular highlight was 87 year old Chick Lowson who was there with his cradle-snatching 93yr old wife. When he told me they had gotten married in 1941 my brain kind of shut down. I was impressed with my three year relationship 10 years ago…..I no longer am.

He then sealed the deal with a beautiful poem that expounded the theory that “Love never dies…” And at 66 years of marriage, he’d know.

He didn’t win though, the gorgeous Miriam Barr took out that honour after she sailed through the first two Judged rounds and then snatched the bulk of the audience votes in the tense three way final.

It was an vibrant alive evening of performance poetry presided over by three fabulous judges in Graham Brazier, Jo Randerson and Canada’s inspirational star of the Writers and Readers Festival, Shane Koyczan. This powerhouse performer blew everyone away with his delicious words: “ I want your body to be something that I did wrong, I want you to hold it against me” and “You make mirrors want to grind themselves back down to sand coz they can’t do your reflection justice.”

The evening concluded when second place winner Jesse Jones picked me up onstage to celebrate then promptly dropped me on my ass. ROCK n ROLL man. (Well more bruises and awkward flashes of undies, but it felt very Jack Kerouac to me.)

In short it was s**t hot, words flew, sweat soaked, red wine ran out…. and you’d better get there early next year. 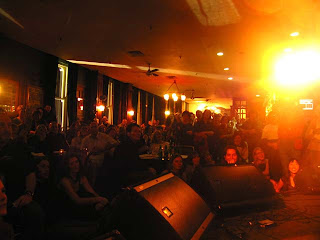 Packed Crowd of Smiles at the London Bar 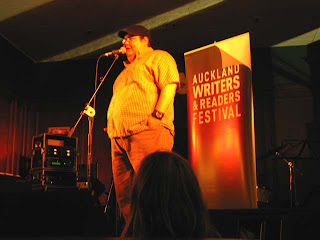 Shane Koyczan
Posted by penash at 10:57 am

penash
Since abandoning a career in ballet due to a pesky need to eat, Penny Ashton is fast making a name for herself as a global poet and comedienne. She has been nominated five times as Best Female Comedienne in New Zealand, twice for a Billy T James Award, once for the People’s Choice Award at the Adelaide Fringe Festival and has received an Honourable Mention at the Wellington Fringe Awards for Best Comedy. One day she hopes to win something. She has performed in numerous NZ Festivals and has travelled to both the Edinburgh and Adelaide Fringe Festivals. Her Hot Pink Festival persona has been a critical and commercial success and has prompted invites to perform in Singapore, London, Australia, Germany and Scotland. In 2006 Penny also represented New Zealand in The World Cup of Theatresports in Germany, toured the performance poetry circuit in the UK and then represented Australasia in the Four Continents Slam UK Poetry Tour in December. In 2007 her brand new show Hot Pink Bits was a total sell-out at the Wellington Fringe.